HAPPY NEW YEAR to one and all!  And for those of you who view the New Year as the beginning of the 2020s, HAPPY NEW DECADE!  Whoa, Nellie!  Where has the time gone?  Hopefully, it has been the basis for creating wonderful memories!  Using the exclamatory phrase "Whoa, Nellie!" provides a Maginot Line for baby boomers and their remembrance/association of how this became part of the boomer lexicon. 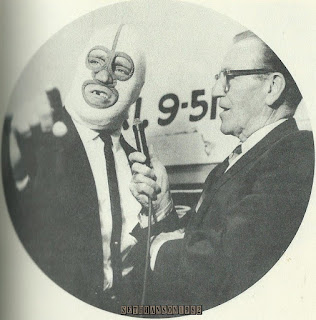 Dick Lane chats with "The Destroyer"

Much younger baby boomers typically associate this phrase with former ABC sports announcer Keith Jackson but more seasoned boomers with a longer time line know that "Whoa, Nellie!" was actually coined by Dick Lane a longtime Southern California announcer who called play-by-play action for roller derby and wrestling from the late 1940s through the early 1970s.  [In fact, Mr Jackson himself acknowledged/credited Mr Lane with coining this phrase that both gentlemen used in their long, distinguished professional broadcasting careers.] For those who grew up in the Los Angeles area, Mr Lane is specifically remembered as the lead announcer for the Thunderbirds team Roller Derby on KTLA Channel 5 and Championship Wrestling on KCOP Channel 13.  These events were broadcast from the Grand Olympic Auditorium in downtown Los Angeles (built in 1924 and one of the few wrestling/boxing arenas still in existence from that golden era -- albeit now as a Korean-American evangelical church).  My father was friends with Mr Lane as both were members of the same lodge and I recall hearing personal accounts on how Mr Lane could make a simple dinnertime conversation a hyper-kinetic event with his energy, charm and genuine interest in people -- especially his fans, old and young alike! 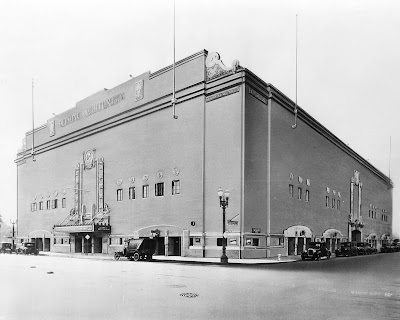 Long before wrestling became a worldwide multi-media mega-billion empire, Mr Lane's signature calls helped elevate wrestlers like Jim Londos, Gorgeous George and Andre the Giant into legendary status while furthering the popularity of the sport.  Similarly, Mr Lane did the same with popularizing Roller Derby worldwide (especially in Australia and Japan) as the LA Thunderbirds reached a peak attendance of over 50,000 for an exhibition match in Chicago's Old Comiskey Park (September 1972).  Fittingly, in the same year, Mr Lane played himself as a roller derby announcer in Raquel Welch's memorable film "Kansas City Bomber." 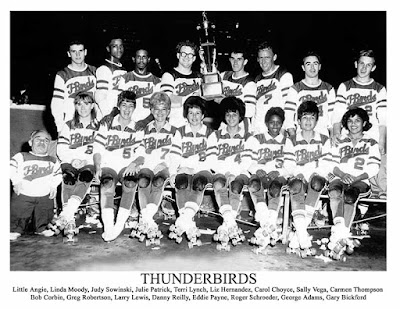 Mr. Lane was posthumously inducted into the "Wrestling Observer Newsletter" Hall of Fame (1996) and the Southern California Pro Wrestling Hall of Fame (2002).  The Grand Olympic Auditorium where Mr Lane demonstrated his broadcast excellence, remains an iconic landmark that transcends its Los Angeles locale, for I would guess that members of the Galaxy audience can relate to similar buildings that once existed in large and small towns alike all across the continental USA.  Even if you did not see such a building in person, you no doubt saw something just like it in Rod Serling's "Requiem For a Heavyweight" or the film noir John Garfield movies from the 1940s, or classic TV shows like "Route 66" and even the Sly Stallone "Rocky" film series that began in 1976.  The Grand Olympic Auditorium and Mr Lane are indelibly associated with a Los Angeles from an earlier period in our history - often eliciting images of smoke-filled arenas -- but transcend space and time as we are reminded of lifetime memories that have now become priceless treasures.

Please join us in celebrating the New Year by sharing memories of wrestling, roller derby and Dick Lane by posting to the Galaxy FACEBOOK page (and be sure to "like" us when doing so) or via e-mail to the GNN web site.  Likewise, I am always receptive to hearing from our wonderful Galaxy audience and/or connecting via LinkedIn. View my LinkedIn profile at: https://www.linkedin.com/in/rev-protodn-george-haloulakos-cfa-bab6b43
Posted by Galaxy Moonbeam Night Site at 11:15 AM