With this familiar greeting, this month's GNN Blog takes this opportunity to celebrate the 35th Anniversary of "Crocodile" Dundee.  Released in 1986, this action comedy featured Paul Hogan in the lead as the rugged outdoorsman Michael J. "Crocodile" Dundee (aka "Mick") with Linda Kozlowski as newspaper journalist Sue Charlton, his romantic interest.  The film begins in Australia where we bear witness to Mick's physical prowess in the Australian Outback and the burgeoning romance with Sue, a newspaper journalist who is there to write a lengthy feature on "Crocodile" Dundee for her employer.  It then shifts to New York City as the newspaper (owned by Sue's father) decides to bring Mick for an all expense-paid visit to the USA as a pretext for continuing the feature story.

While in Australia, Mick is clearly in his element having fun with his mates while escorting Sue deep into the Outback providing physical evidence for his legendary exploits that are to be profiled in Sue's feature article.  When the scene shifts to New York City, the film becomes a comedy of manners as Mick deals with various situations while somewhat bemused by American big city customs and behavior.  Among just a few of the social situations that our hero deals with, while delivering some memorable lines: 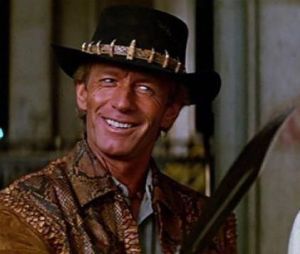 An attempted robbery is broken up when Mick responds to his attacker -- that is brandishing a switchblade (as Sue cautions Mick to be careful because the assailant has a knife) -- by pulling out his very own outsized "Jim Bowie" hunting knife while laughingly declaring "that's not a knife, THIS is a knife" and then swiftly dissuading the would be muggers from further engagement while noting they are just kids having fun!

Our hero tells a New York driver to "get on the right side of the road you pelican!" Mick concludes the reason there are so many car accidents in the US is that the steering wheel is on the wrong side of theThere is much more, especially when Mick attends various social gatherings.  But this small sample reflects the "fish out of water" theme as the film audience connects with the man who has ventured from the Australian Outback into a very different kind of jungle, New York City (aka The Big Apple).  Mick is able to skillfully navigate the urban jungle while making friends, winning the admiration of the public and maintaining his integrity while exercising common sense.  He is a person who shows himself to be attractive to both men and women with a carefree, devil-may-care approach to life. 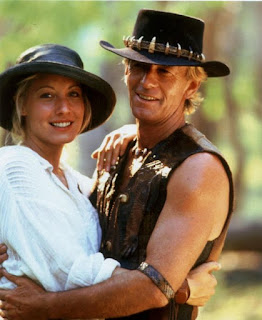 Vintage film buffs will note that in some ways "Crocodile" Dundee is a 1980s variant of the 1942 MGM classic "Tarzan's New York Adventure" that starred Johnny Weismuller.  Both of our heroes remain quietly but firmly self-confident as they try to make sense of big city behavior and civilization.  When circumstances require bravery and integrity, both Tarzan and Mick are able to come to the rescue.  It is a theme that transcends time while successfully being able to poke fun at prevailing social customs of the day!

One of my favorite lines came from the Los Angeles sequel.  Early in the film the audience -- along with Mick -- sees actor George Hamilton playing himself in a cameo appearance at a Hollywood party where he is extolling the virtues of coffee enemas.  Later in the film when Mick is hosting a fellow Outback survivalist named Jacko who is visiting LA, the two outdoorsmen are seen walking along Hollywood Boulevard passing by a local gourmet coffee outlet.  When Jacko suggests they have coffee, Mick (recalling his earlier encounter with George Hamilton) tells his friend "Oh no, mate.  You do not want to have coffee the way they do here!"

Part of the enduring fun is seeing Mick handle all the different challenges - be it through physical prowess, common sense, humor and the cleverness we associate with survivalists - while having the respect and love of Sue as well as the deep friendship with his mates from the Australian Outback.  It's a winning formula that still holds true more than 35 years later!

If you have special memories of our favorite Australian Outback survivalist that you would like to share, please post to the Galaxy FACEBOOK page (and be sure to "like" us when doing so) or via e-mail to the GNN web site..  Please connect with me via LinkedIn (where my active following is now 1,100+ and steadily growing).  View my profile at: https://www.linkedin.com/in/rev-protodn-george-haloulakos-cfa-bab6b43

Posted by Galaxy Moonbeam Night Site at 7:48 PM No comments: