As we ring in the New Year, have any of you ever wondered what would happen if you could relive the prior year with the goal of trying to avoid repeating the mistakes made?  This theme of reexamining one's past is found in both literature (e.g. Charles Dickens' A Christmas Carol) and film (e.g., Frank Capra's It's A Wonderful Life).  The outcome of such stories typically enable the central character to come to terms with the past while looking to the future with renewed faith and optimism.  It is usually during the Holiday Season when such journeys of the mind and spirit take flight due to the confluence of nostalgia, self reflection and making New Year's resolutions!

While the aforementioned titles are well known to fans of both great literature and film, we would like to add Repeat Performance -- a film noir set in a "noir-ish" New York City Broadway Theater society setting from the same era -- to your list of must-see film classics.  The film opens on New Year's Eve 1946 with a woman named Sheila (played by Joan Leslie) killing her husband Barney (Louis Hayward) with a gun.  Sheila fervently wishes she could relive 1946 and avoid the mistakes she made throughout the year that led to such a tragedy.  Since Sheila made her wish exactly at the stroke of 12 midnight, her wish is magically granted and she is transported back in time to the beginning of 1946 with her husband alive.  As such, Repeat Performance is a fusion of film noir crime with fantasy / paranormal elements. 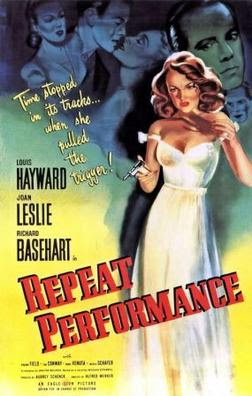 Our heroine (or perhaps more accurately, anti-heroine) attempts to relive the year without making the mistakes both she and her friends made throughout the year, but numerous events repeat themselves despite her best efforts to avoid missteps, leaving her to wonder whether her fate is permanently cast in stone.  Classic film buffs will observe how Repeat Performance evokes the image of Alfred Hitchcock's Rope by immediately opening with the murder and then as the central character attempts to relive the year with the goal of achieving a happier ending, we witness parallels to All About Eve and A Star is Born with its voyeuristic view of the ego maniacal worlds of stage and film.  Along with Joan Leslie and Louis Hayward in the lead roles, there are some truly stellar performances by other very familiar actors:

> Tom Conway as John, the producer;

> Richard Basehart as William, an unhappy poet but a very loyal friend to Sheila;

> Natalie Schafer as Eloise, a very wealthy, but treacherous and nasty patron of the arts. 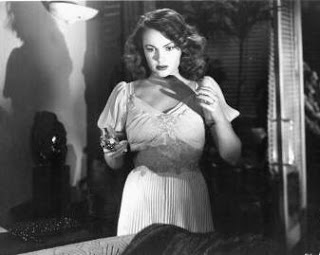 While it would appear that the year 1946 will have the exact same tragic ending as before, a few twists are in store.  Sheila's repeated efforts at altering the mistakes that occurred during the year end up leading her abusive husband Barney to believe that she wants to destroy him.  On New Year's Eve Barney has a violent confrontation with Sheila.  It turns out that the only person who actually believed Sheila's account about reliving 1946 and the climactic murder that would occur at the end of the year was William, the aforementioned unhappy poet but loyal friend (played by Richard Basehart).  This is the crucial element in Repeat Performance for it is William who emerges upon the scene when Barney is about to harm Sheila, and it is William that ends up shooting Sheila's husband with her gun!  Thus Sheila's wish comes true, but with far greater difficulty than expected!

Repeat Performance is a much darker film than either the film versions of Dickens' A Christmas Carol or the variants of Capra's It's A Wonderful Life.  This haunting and hypnotic film noir classic is something that would fit nicely into Rod Serling's Twilight Zone.  Moreover, fans of classic TV will enjoy seeing Natalie Schafer (most famous as Mrs Thurston Howell III from Gilligan's Island) initially taking Richard Basehart (known for playing Admiral Nelson on Voyage to the Bottom of the Sea) under her patronage but then doing him great harm.  This tour de force from the film noir era is a glamorous if perhaps under appreciated treasure.  As we ring in the New Year, take a walk down film noir memory lane by checking out Repeat Performance. 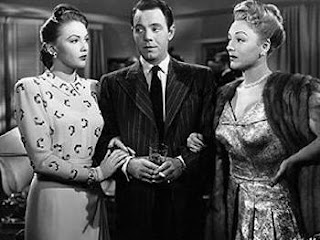 If you wonder what it would be like to relive a specific year all over again, please share your thoughts and memories via posting on to the Galaxy FACEBOOK page (and be sure to "like" us when doing so) or via e-mail to the GNN web site.  Likewise, I am always receptive to hearing from our wonderful Galaxy audience and/or connecting via LinkedIn.