The 100th Anniversary of the Sinking of Titanic (Program 82) 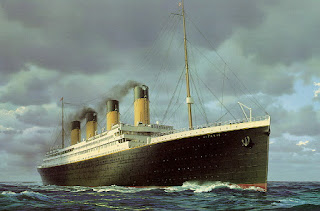 On program 82, we remember the 100th anniversary of the Sinking of Titanic. While not a baby-boomer topic itself, interest in Titanic and in this tragic incident has transcended generations. The fascination with this event has not waned in the past century, and baby-boomers certainly share in that interest.

Everyone knows the story of how Titanic was on it's maiden voyage and struck an iceberg on April 14, 1912. The drama of that night has been written about and documented in motion pictures and television programs. On our show, we review the events of that night, discussing some interesting contributors to that collision. We look back at some of the personalities on board, the eventual rescue, and how life moved on for those who survived.

We also look at the cultural side of Titanic, the motion pictures and books written about this event. All in all an interesting review of this tragic event. We pause to remember the vicitms of Titanic. Those who did not survive. After all, this is a human story, each indiviudal who perished was a life worthy of remembrance.
Posted by Galaxy Moonbeam Night Site at 3:13 PM No comments: