In the past, Galaxy Nostalgia Network podcasts and blogs have celebrated excellence in conversation (Johnny Carson), imagination (Rod Serling), appreciation for outdoor wildlife photography (Mutual of Omaha's "Wild Kingdom"), honoring the valor and sacrifice of American combat veterans (70th Anniversary of D-Day), and more recently we celebrated love in popular literature & film ("Love Story") as well as heroism for the Space Age (Apollo 13).  This month we recognize the oft used expression that laughter is the best medicine by celebrating the Marx Brothers -- 70+ years after their last motion picture was released ("Love Happy" in 1949). 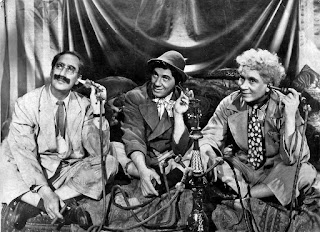 It is indeed a tribute to the genius of the Marx Brothers that so much content from their comedic routines have become an integral part of American culture spanning multiple generations.  When thinking of the Marx Brothers, Groucho, Chico and Harpo are the best remembered because this trio formed the "core" of this comedy team.  Two other brothers, Zeppo and Gummo, were also part of the team in the early years but later departed to pursue business careers at which they were successful.

What are the reasons for the staying power of the Marx Brothers and why do they continue to make us laugh?  My thought here is that their wide range of comedy styles arising from their distinct and ever memorable personalities were an almost invincible if not timeless combination.  Groucho's acerbic wit is peerless, Chico's comic ignorance and charm coupled with Harpo's gregarious physical comedy made for some memorable on-screen moments.  Here, in the interest of brevity, we offer a sniff of the cork:
> Groucho making the observation to co-star Margaret Dumont that he could visualize her slaving over the hot stove, but he could not see the stove!  Or his rendition of "Hooray for Captain Spaulding" - that later became the theme song for his 1950s TV show "You Bet Your Life."
> Harpo's mirror scene with Groucho in the film "Duck Soup" as well as becoming overtly friendly with the female cruise workers in the close quarters of an ocean liner stateroom causing Groucho to say that Harpo did better with the opposite sex while asleep than he (Groucho) did while awake!  The famous stateroom scene was from "A Night at the Opera."
> Chico still raises laughter when we repeatedly hear him ask "Why a Duck" in the film "Cocoanuts" and witness his "Sanity Claus" addendum to a contract he was drawing up for Groucho in "A Night at the Opera." 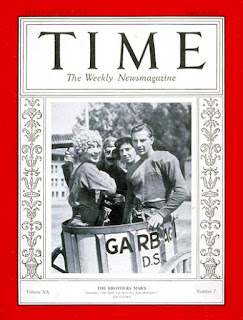 Groucho's ability to carry on rapid-fire conversation filled with sharp wit and double meanings without his brothers present enabled him to not only have more screen time, but to be a most effective straight man providing a segue for the antics of Harpo and Chico.  Harpo and Chico were also remarkable musicians as each of their films featured Harpo playing the harp and Chico playing the piano.  The love and seriousness of purpose displayed in their musical prowess was evident in their visage, thereby providing a nice break from the comedy but in no way disrupting the story line.  Harpo was a fusion of sweetness and malicious mischief.  Chico's lack of general knowledge and tenuous capability with the English language would often create humorous misunderstandings.  With all three brothers in perpetual motion and on-going conversation, it was a demonstration of extemporaneous or spontaneous comedy at its best!  Its unpredictable edginess made it a challenge for directors and co-stars alike (as well as censors), but the lasting popularity of their films demonstrate that the formula worked!

In the midst of being sheltered in place, people have been binge watching everything from classic TV and film to great moments in sports history.  To that list we would add or suggest you take time to watch the Marx Brothers.  Their brand of timeless humor will make you laugh and temporarily forget about the problems or issues of the day.

Please join us in celebrating the Marx Brothers -- the platinum standard in comedy -- by telling us which are your favorite Marx Brothers films by posting to the Galaxy FACEBOOK page (and be sure to "like" us when doing so) or via e-mail to the GNN web site.  Please also include your favorite moments or special routines of this remarkable comedy trio who remind us that humor does not have to be personally hurtful or crass to be truly funny.  Likewise, I am always receptive to hearing from our wonderful Galaxy audience and/or connecting via LinkedIn.
View my LinkedIn profile at: https://www.linkedin.com/in/rev-protodn-george-haloulakos-cfa-bab6b43
Posted by Galaxy Moonbeam Night Site at 11:12 AM No comments: