The Summer of 2020 has marked the return of America's manned spaceflight program with the successful SpaceX Dragon.  As we watched the first splashdown of an American manned space expedition since 1975, we were reminded that this landmark accomplishment with its enormous and optimistic promise for the future has its roots in classic science fiction TV.  As it turns out, “Lost in Space” (the classic CBS television series airing from 1965-68) reflected scientific protocols of the 1960s while offering a preview of what future rocket ships would look like!  In fact, the view from 1965 accurately depicted the design, propulsion and long-range missions that we are now starting to witness.  Viewed through the prism of 1960s scientific knowledge and mission protocols, the future as envisioned by “Lost in Space” (LIS) was both feasible and achievable.  Based on expert authority, we can make the case that LIS helped inspire the future through imagination.  The first five episodes of LIS contained most of the footage from the series pilot, "No Place to Hide" (which we covered in great detail in a Galaxy podcast titled "Man, Moon, Media & Myth" first broadcast October 2011). But in episode #6, the content of the "Lost in Space" series was entirely new while providing a template for what the future would eventually look like for rocket mission fundamentals. 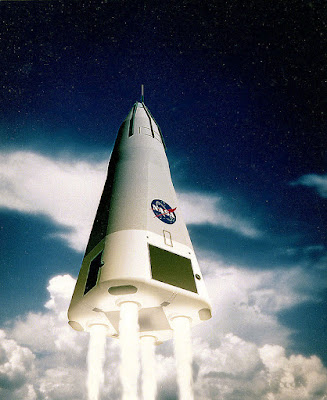 This particular episode, titled "Welcome Stranger," originally aired on October 20, 1965 with guest star Warren Oates as American astronaut James Hapgood who has come to enjoy the life of a roving space cowboy.  Hapgood and his rocket ship "Travelin' Man" lifted off from Earth on June 18, 1982 aiming for a possible soft landing on Saturn as an optional part of a fly-by survey mission. He missed his landing and has been wandering in space for 15+ years before his encounter with the Space Family Robinson in the late 1990s.  “Welcome Stranger” reflected 1960s scientific protocols – notably use of nuclear engine rocket vehicle applications (NERVA) for interplanetary and interstellar space travel. In this era, manned space flights to Mars were being planned, with possible missions to Saturn and Jupiter. At that time, a soft landing on Saturn or Jupiter was deemed possible as the gaseous composition of both planets was not yet fully known. Hence, the basis for this LIS story line.  When we view the launch of the "Travelin' Man" rocket ship (shown in the Black & White photo below this paragraph) it eerily resembles not only the rocket ships of the Mercury/Gemini Redstone programs from the 1960s, but accurately presages the McDonnell Douglas Delta DC-X Clipper (color photo shown as well) which presaged the SpaceX Dragon by more than 25 years!  The resemblance of both the imaginary and real space vehicles is underscored by the artist rendition of "Travelin' Man" that is also included in this article. 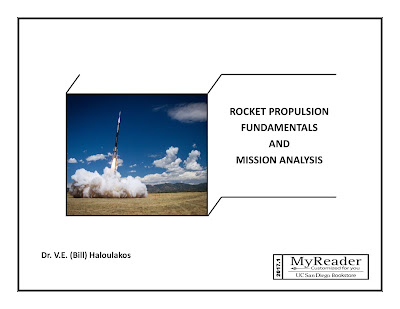 While LIS aired on network TV, aforementioned long-range missions were not only in the works but would require nuclear rockets to make them feasible/achievable. Moreover such expeditions were planned to occur in what would be the same timeline of the future as envisioned by “Lost in Space.” This is the essence of the book titled Rocket Propulsion Fundamentals and Mission Analysis, by Dr Vassilios Elias Haloulakos, that documents his research and technical contributions to helping conceive or develop nuclear rockets as well as reusable rocket ships such as the McDonnell Douglas DC-X, long before Space-X and Blue Origin ~ thereby affirming the scientific basis of the LIS future!  Here is a picture of the tantalizing cover of this book and its vision for the future that is now being realized.  Again, we would refer you to once again listen to the Galaxy "Man, Moon, Media and Myth" podcast for further insights.

While the public was largely enthralled with the USA versus USSR race for the first manned moon landing during the 1960s, other manned space flights for the ensuing decades (1970 - 2000) were also being planned for Mars along with possible missions to Saturn and Jupiter. At the time and as already noted, a soft landing on either Saturn or Jupiter was deemed possible as the gaseous composition of these two planets was not yet fully known. Viewed through the prism of scientific knowledge and mission protocols during the 1960s, a landing on Saturn’s moon Titan was understood as both feasible and achievable as an intermediate step before landing on Saturn itself. NERVA was the technology to make this happen! 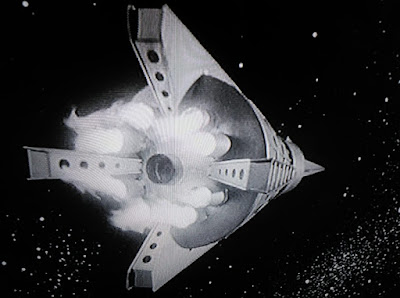 NERVA applied also to the goal of fulfilling interstellar space travel. In LIS, the original mission of the Jupiter II saucer craft was to transport the Space Family Robinson to the Alpha Centauri star system. When space cowboy Hapgood explains that he was traveling on a path taking him to Epsilon Eridani, a type K main sequence star, as is Alpha Centauri B, it becomes evident that for Hapgood and the Robinsons to cross paths was clearly in the realm of possibility in the future envisioned by “Lost in Space,” which itself was an extension of 1960s scientific knowledge! 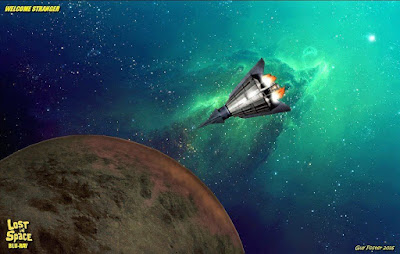 What are the takeaways as we reflect on the connections of the SpaceX Dragon with classic science fiction TV?  First, the “Travelin’ Man” rocket ship is a fusion of the Mercury & Gemini manned space capsules (1960s) but its Delta configuration (plus landing struts) - which became a signature characteristic of the DC-X reusable rocket that made its debut in the 1990s - is a testimony on how "Lost in Space" offered a realistic if not achievable future based on science fact! Second, the same can be said about envisioning the astronaut space suits.  What this teaches us is that advancing the future begins with Imagination -- which can take us to places we once thought might be unattainable.

Please join us in saluting the resurgence of America's manned spaceflight program along with the 55th anniversary of the TV show ("Lost in Space") that helped inspire the future by sharing your thoughts by posting to the Galaxy FACEBOOK page (and be sure to "like" us when doing so) or via e-mail to the GNN web site.  Likewise, I am always receptive to hearing from our wonderful Galaxy audience and/or connecting via LinkedIn. View my LinkedIn profile at: https://www.linkedin.com/in/rev-protodn-george-haloulakos-cfa-bab6b43
Posted by Galaxy Moonbeam Night Site at 2:33 PM No comments: