Eliot Ness and The Untouchables (Podcast 39) 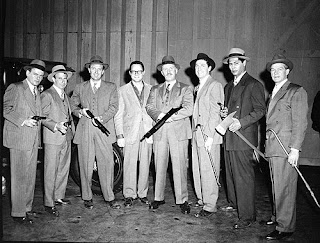 In Podcast 39, Ian Rose tells us the real story of Eliot Ness and "The Untouchables". The hit TV series ran on ABC-TV from 1959-63. Learn what was real and what was not-so-real in the TV series. "The Untouchables" which starred Robert Stack and was narrated by Walter Winchell is being released on DVD.
Posted by Galaxy Moonbeam Night Site at 2:47 AM No comments:

A Great Look Back at TV Production History

Posted by Galaxy Moonbeam Night Site at 7:27 AM No comments:

Smitty shares news with us of a recently discovered early color video tape. The tape is a recording of "Meet Cyd Charisse" from 1959. Unplayed since that time and in pristine condition, the tape is in beautiful NBC "Living Color". Listen to Podcast 37 for details. And here is the opening number from this program.

Posted by Galaxy Moonbeam Night Site at 12:04 AM No comments: