We are saddened at the passing of Neil Armstrong, first man to walk on the surface of the moon.  Heroes are sometimes difficult to find, but in Neil Armstrong, we all had a hero from the days when America had set its sights on landing a man on the moon and returning him safely to the earth.  The days of the Apollo Space Program were an exciting time to be alive and to be an American.  The nation fulfilled the promise to the late president John F. Kennedy when he stated in 1961 that the United States had all of the available resources and manpower to land a man on the moon and safely return him home by the end of the 1960s.  Neil Armstrong and Buzz Aldrin, the two men who first set foot on a heavenly body other than this earth, have gone down in history.  Now that we have lost Mr. Armstrong, he has become legendary, and will be remembered for generations to come.  The staff of Galaxy Moonbeam Night Site salutes the memory of Neil Armstrong, and recall his "One Giant Leap for Mankind" he took on July 20, 1969.

Posted by Galaxy Moonbeam Night Site at 2:28 AM 2 comments: 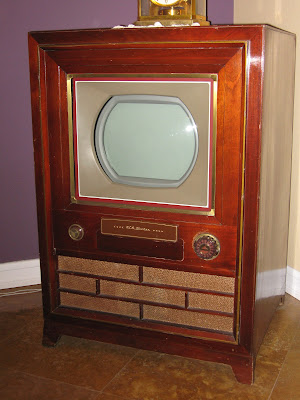 In program 91, we talk about the history of Early Color Television.  The many technical developments along the way to creating a viable color system as well as the programming that was featured in those early days.  On the program we mention RCA's first production color TV set.  Here it is pictured above, the RCA Victor CT-100.  It made it's appearance in 1954, and featured a 15" screen.  The color on this set was very vivid, and almost had a Technicolor likeness to it.  This set originally cost around $1,000, several times the price of a conventional Black and White set.  Today it is a very desirable collector's item.  To see more early color sets, please go to our Facebook page and look at the Early TV Set Gallery.
Posted by Galaxy Moonbeam Night Site at 1:31 AM 3 comments: