This month marks the 50th anniversary of when "COLUMBO" began airing regularly as a major network TV show, running from 1971 - 1978.  However, this endearing and much celebrated fictional police detective, actually had three separate runs, and herein, are some interesting plot twists that equal some of the wonderful scripts that featured Peter Falk in the starring role.

Created by Richard Levinson and William Link, it was originally thought by the two writers that either Lee J. Cobb or Bing Crosby should play the role of Columbo.  However, with Cobb unavailable and Crosby declining the offer, director Richard Irving convinced Levinson and Link that Peter Falk would be an excellent choice as the fictional homicide detective for the Los Angeles Police Department.  This decision was part one of Peter Falk's association with the character he became inextricably connected with for the remainder of his career.  In the late 1960s, NBC was airing full length, made-for-TV movies featuring major film and television stars.  As part of this lineup in 1968, a one-off TV-Movie-of-the-Week, "Prescription: Murder" featured Peter Falk in his debut as Lt Columbo matched against a psychiatrist (played by Gene Barry) who murdered his wife (Nina Foch).  This one-off film proved so popular that network executives requested that a pilot for a potential series be made to determine whether the character could be sustained on a recurring basis.  This was part one of the Peter Falk / "COLUMBO" saga. 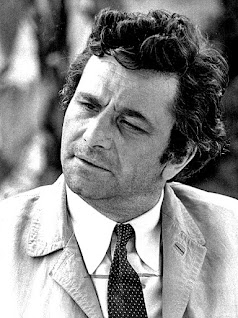 Part two began with the pilot "Ransom for a Dead Man," a 1-1/2 hour film featuring Lee Grant as the killer that aired in 1971.  The popularity of the pilot prompted the decision to create a regular TV series but with a few notable twists or real points of difference that helped catapult both "COLUMBO" and Peter Falk to legendary status.  With the series now given the go-ahead, thereby beginning its second run (the first being the aforementioned one-off "Prescription: Murder") it was decided to air "COLUMBO" about once a month as part of The NBC Mystery Movie, a rotating series that not only featured Peter Falk as "COLUMBO" but Rock Hudson in "McMillan & Wife," Dennis Weaver as "McCloud" and Richard Boone as "Hec Ramsey."  As a motion picture star, Falk refused to commit to a grinding schedule of filming a new episode every five days.  The extra time now available led to a much higher quality product since each "COLUMBO" episode was essentially filmed and aired as a full-length, made-for-TV film!  Given the stellar line up of guest stars (including Academy and Emmy Award winners from Hollywood's storied past), each "COLUMBO" movie was truly a special event.

For the next seven years, "COLUMBO" dominated its time slots: in its first year, it was shown on Wednesday evenings, but in its second year it moved to Sunday evenings, where it remained a fixture in the NBC lineup.  The season premiere episode for Fall 1973, "Any Old Port in a Storm," proved so popular that NBC made the unusual decision to broadcast an encore just a few weeks later!  This episode featured Donald Pleasence as an eccentric winemaker who murders his brother to maintain financial control of the family winery, only to have the crafty Lt Columbo -- whose new-found knowledge of wine was shared with the TV viewer -- create an elaborate trap revealing how the murder was committed.  Counting the original one-off 1968 "Prescription: Murder" and the 1971 pilot "Ransom for a Dead Man," a total of 45 "COLUMBO" episodes (full-length made-for-TV films) were made from between 1968 - 1978.  This was part two of the "COLUMBO" / Falk saga. 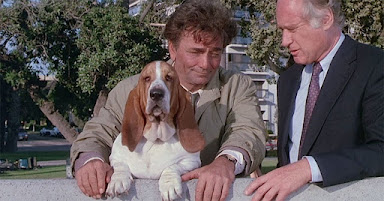 Part three ran from 1989 - 2003, as the ABC TV network revived the series with Peter Falk returning as Lt Columbo in 24 "specials" that aired over a fourteen year period.  In this sequence, our favorite homicide detective showed that like a fine wine, he improved with age.  Many of the stars who had previously been on its original 1971-1978 series, rejoined Peter Falk to tantalize audiences with new variants of a time-honored formula as Lt Columbo continued to match wits with the rich, famous, powerful and amazingly gifted perpetrators who invariably underestimated the keen intellect of their police adversary.  With vintage or classic TV, there is obviously a treasure trove of trivia to unpack.  But with this month's GNN blog, we hope this will inspire you to check out the many websites devoted to Peter Falk in his signature role as "COLUMBO."  You may also revisit "COLUMBO" by watching ME TV every Sunday which is airing the entire series sequentially, or watch on DVD or streaming.

If you have special memories of "COLUMBO" and Peter Falk that you would like to share, please post to the Galaxy FACEBOOK page (and be sure to "like" us when doing so) or via e-mail to the GNN web site..  Please connect with me via LinkedIn (where my active following is now 1,100+ and steadily growing).  View my profile at: https://www.linkedin.com/in/rev-protodn-george-haloulakos-cfa-bab6b43

Posted by Galaxy Moonbeam Night Site at 8:16 AM No comments: