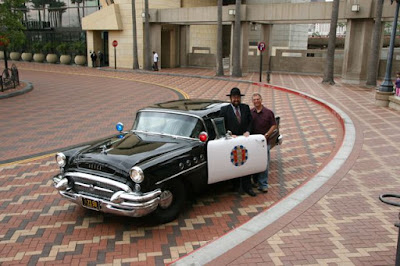 "He Was Innocent---Not a Charge Was True"

We've received a couple of e-mails asking us to check out the old rumours that TV/movie personality Chuck Connors was "Branded" as an adult film star before he hit the big time as Lucas McCain in the TV Series "The Rifleman". Look for our findings, in a future episode of Galaxy Night Site, the Podcast.

Posted by Galaxy Moonbeam Night Site at 2:41 PM No comments:

The career of Broderick Crawford began on the big screen, but he truly found his fame with Baby Boomers as Chief Dan Matthews of the California Highway patrol. Our own Ian Rose profiles the man with the gravelly voice, and the face that insipred dog owners everwhere to name their mutts "Broderick".
Posted by Galaxy Moonbeam Night Site at 2:29 PM No comments:

Let George Do It - Our Spotlight Radio Show Oldie

Let George Do It was a radio drama series produced by Owen and Pauline Vinson from 1946 to 1954. It starred Bob Bailey as detective-for-hire George Valentine (with Olan Soule stepping into the role in 1954).

Clients came to Valentine's office after reading a newspaper carrying his classified ad:

Personal notice: Danger's my stock in trade. If the job's too tough for you to handle, you've got a job for me. George Valentine.


The few earliest episodes were more sitcom than private eye shows, with a studio audience providing scattered laughter at the not-so-funny scripts. Soon the audience was banished, and George went from stumbling comedic hero to tough guy private eye and the music from wah-wah-wah to suspenseful. Valentine's secretary was Claire Brooks, aka Brooksie (Frances Robinson, Virginia Gregg, Lillian Buyeff). As Valentine made his rounds in search of the bad guys, he usually encountered Brooksie's kid brother, Sonny (Eddie Firestone), Lieutenant Riley (Wally Maher) and elevator man Caleb (Joseph Kearns). For the first few shows, Sonny was George's assistant, but he was soon relegated to an occasional character.

Sponsored by Standard Oil, the program was broadcast on the West Cast Mutual Broadcasting System from October 18, 1946 to September 27, 1954, first on Friday evenings and then on Mondays. In its last season, transcriptions were aired in New York, Wednesdays at 9:30pm, from January 20, 1954 to January 12, 1955.

John Hiestand was the program's announcer. Don Clark directed the scripts by David Victor and Jackson Gillis. The background music was supplied by Eddie Dunstedter, initially with a full orchestra. When television supplanted radio as the country's primary home entertainment, radio budgets got skimpier and skimpier and Dunstedter's orchestra was replaced by an organ.

Listen to free episodes of Let George Do It by Clicking Here
LET GEORGE DO IT
Posted by Galaxy Moonbeam Night Site at 9:44 PM No comments:

Here's a grat piece of radio history, an actual 1997 studio session of the Shotgun Tom, KRTH 101 jingle by the Johnny Mann Singers. They did the majority of radio jingles in L.A. radio for the past 45 years. Shotgun Tom will be a guest on an upcoming segment of Galaxy Moonbeam Nightsite. He's a great guy, and the true "DJ Emeritus of Southern California AM/FM msic radio---Stay Tuned!

Posted by Galaxy Moonbeam Night Site at 9:23 PM No comments: