Baseball is a game that marks the passage of time.  This summer as we celebrate the 60th Anniversary of Roger Maris hitting 61 home runs in 1961, we are reminded there is so much more than just a number when taking the measure of a man.  Baseball analytics, which views the game on the diamond through the prism of statistics and metrics, reveal a very good player that in a twelve year career (1958-1967) slugged 275 home runs with a .260 batting average and 850 runs batted in (RBI).  According to Baseball-Reference.com, this record generated 38.3 wins above replacement (WAR) that enabled Maris to earn two Most Valuable Player awards (1960-61) and appear in seven major league All-Star games.  At the peak of his career, Maris posted three consecutive seasons with 100 or more RBIs (1960-61-62) while helping the New York Yankees win three American League Pennants and two World Series Championships in that same period.  But these are just numbers, for with the passage of time we can appreciate Roger Maris as "A Man For All Seasons." 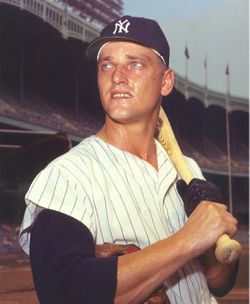 Maris was a player whose peak occurred at a time of enormous cultural, demographic and political change.  The mixed response to his pursuit of Babe Ruth's single season home run record at the outset of the 1960s reflected a generational divide along with the emergence of athletes as celebrities.  The onslaught of media coverage created such enormous pressure and public consternation for Maris that his only refuge could be found on the playing field.  In the decades since his record setting 1961 season, Maris can now be appreciated for not only being a man who placed team above self but a devoted husband and father who led an ethical life both on and off the field.

Since the decade of the 2000s, ongoing revelations of alleged use of steroids by many of the pursuers of baseball's home run records, the seemingly endless news reports of players committing physical abuse against loved ones, cheating and the like have helped to enlarge and affirm not only the magnitude of Maris's accomplishments on the field but demonstrate he was a man of honor, dignity and integrity.  When Maris hit his record setting sixty-first home run in a 1-0 season finale over the Boston Red Sox, it demonstrated for all time that beyond mixed press relations or controversy about Hall of Fame worthiness this was a man who was committed to being a good teammate dedicated to winning with integrity.  This carried beyond his Yankee tenure as Maris finished his career with the St Louis Cardinals helping the Redbirds win two National League Pennants and a World Series in his final two seasons (1967-68).  It was through his association with St Louis that Maris was able to launch a very successful career with a beer distributorship set up by Cardinals owner Gussie Busch.  Life after baseball proved to be most fulfilling for the man who is best remembered for 61 in '61.  In 1984, one year before his passing, the Yankees honored Maris by inducting him into the hallowed Monument Valley in Yankee Stadium with an inscribed plaque featuring a subtitle "Against All Odds."

Although Maris's playing career occurred in the crossfire of cultural, demographic and political changes of the 1960s, the memory of the type of person he was seems to have transcended that most tumultuous time.  While his grave site commemorates 61 in '61 (along with the US Postal Service doing the same with its 1999 commemorative stamp for its century series), thanks to wonderful articles, books and films we are able to appreciate the life story behind those numbers.  The man who starred with baseball's most legendary team while receiving accolades from the President of the United States was able to retain the common touch by having life-long friendships with teammates and fans alike.

To learn about the person forever associated with the number 61, here are some recommendations for summertime reading and/or viewing pleasure. 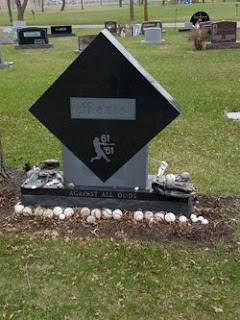 There is of course, much more.  But these three are my personal favorites, and perhaps this will encourage many of you to find other such treasures.  If you do, please post to the Galaxy FACEBOOK page (and be sure to "like" us when doing so) or via e-mail to the GNN web site..  Please connect with me via LinkedIn (where my active following is now 1,100+ and steadily growing).  View my profile at: https://www.linkedin.com/in/rev-protodn-george-haloulakos-cfa-bab6b43

Posted by Galaxy Moonbeam Night Site at 8:31 AM No comments: