GOATS, Heroes and Health Care Professionals - -- People We Remember and Appreciate in the Midst of Challenging Times --

While most people have been sheltered in place in the midst of the worldwide public health crisis, popular conversation has revolved around the interrelated subjects of GOATS (Greatest Of All Time), heroes and health care professionals.  Specifically, with the absence of major league sports, popular conversation has been aimed at discussing if not debating the Greatest Of All Time sports figures (hence the acronym GOATS) with emphasis on heroic play under time pressure or extremely competitive circumstances for all types of sports in different eras.  At the same time, the reality of COVID-19 has also provided a sobering reminder on the heroes in our everyday lives, especially health care professionals -- whether it is physicians, nurses, technicians or support staff.

This ongoing nationwide conversation prompted my personal remembrance of a very, very special man, who was a GOAT not only in NFL Football but also the medical profession: Dr Daniel John Fortmann (1916-1995).  Dr Fortmann was our family doctor from the mid-1970s to the early-1980s.  He was a renowned physician & surgeon in Southern California from 1946 - 1984, and during that time was the team physician for the Los Angeles Rams (1947-1963).  Yours truly along with my parents were greatly blessed to be under his care as Dr Fortmann embodied all the ideals we associate with amazing health care professionals: Excellence, Integrity and Compassion.  The public itself was blessed by this man's towering presence as he was named chief of staff at St Joseph Hospital (Burbank, CA) in 1965. 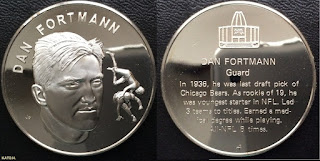 I became acquainted in the mid-1970s with Dr Fortmann while I was in college.  At our first meeting --  not fully knowing just who this man really was -- I remarked to him that I had read about the gridiron exploits of an NFL Hall of Famer "Danny" Fortmann, team captain for the Chicago Bears during a career spanning 1936-1943.  He smiled and chuckled softly while acknowledging that he was THAT man!  Dr Fortmann then showed me a coin he wore around his neck that was the very same coin used in the coin-toss for the 1940 NFL Championship where he helped lead the Bears to a 73-0 victory over the favored Washington Redskins.  Needless to say, I was bowled over to be in the medical care of a person who was not only a football hero, but a hero in real life.  Here is a synopsis of a truly inspired life:

Baby boomers who are longtime NFL fans may recall that when the NFL 100th Anniversary All-Time Team was presented earlier this year at the 2020 Super Bowl, Dr Fortmann's photo from his playing days was on display with other all-time greats departed this life before us.  Despite a comparatively short career, he was regarded by coaches and peers as the best and most important player on his team during his collegiate and NFL playing days.  He was the anchor for the legendary "Monsters of the Midway" (as the Bears were known in that era) as a 7-time First Team All-Pro (1937-1943) as a 3-time NFL Champion (1940, 1941 and 1943) plus 3-time Pro-Bowl selection (1940-1942).  As a guard who anchored the era's most dominating team, Dr Fortmann was also named to the NFL All-Decade Team for the 1930s. 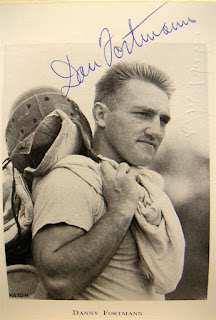 Most people would regard this as sufficient for one lifetime, but for this GOAT, it was just the beginning as he would make his greatest and most lasting contributions in service to others as a premier physician and surgeon (in both military and civilian venues) -- ALL of which followed his stellar gridiron career!  Dr Fortmann was a man for all seasons.  When engaged with conversation with friends and colleagues alike, I find that being able to talk about someone who was truly a GOAT, hero and a force of nature in the all-important health care arena makes for a refreshing change from the all-too familiar popular discourse on the drama associated with sports stars who are obsessed with their personal brand, legacy management or rewriting history to fit their social media profiles.

Do you have a special someone who continues to be a point of light that you regard as a GOAT or hero, or perhaps someone who has been of immeasurable help to you and loved ones while confronting a health crisis?  I feel privileged and blessed to have known such a man as Dr Dan Fortmann and am certain everyone in our GNN audience can relate to this.  Please join us in celebrating the real GOATS, heroes and health care professionals -- transcendent people in our lives -- by posting to the Galaxy FACEBOOK page (and be sure to "like" us when doing so) or via e-mail to the GNN web site.  Likewise, I am always receptive to hearing from our wonderful Galaxy audience and/or connecting via LinkedIn.
View my LinkedIn profile at: https://www.linkedin.com/in/rev-protodn-george-haloulakos-cfa-bab6b43
Posted by Galaxy Moonbeam Night Site at 9:15 AM No comments: