A Valentine's Day Celebration Of An Iconic Romance Novel

This February 14th not only marks our celebration of Valentine's Day but also the 50th anniversary of the publication of Erich Segal's Love Story, a best-selling romance novel later made into a full length motion picture the very same year starring Ryan O'Neal and Ali MacGraw.  At 131 pages, this slim, hardbound book stayed for 41 weeks on the New York Times Best Seller List, reaching Number One!  Love Story is romantic, humorous and tragic.

The story of two young people -- Ollie and Jenny -- from entirely different backgrounds who fall in love, marry and then face the daunting challenge of self-financing Ollie's law school education is one that reflected the pop culture of the 1960s.  Ollie comes from a very wealthy New England family while Jenny is the only child of a Rhode Island baker.  Since Ollie's parents oppose the marriage, this leads to an estrangement. 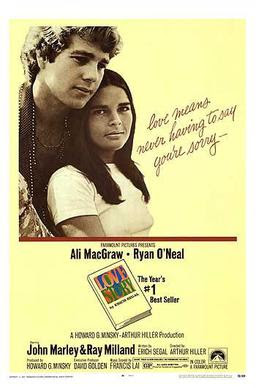 Set in Boston and New York City, our romantic duo not only survive but thrive as Jenny teaches private school while Ollie graduates 3rd in his law school class, thereby receiving-and-accepting a job offer from a respectable New York law firm.  With the wind seemingly at their backs, tragedy strikes as Jenny is diagnosed with Leukemia and the prognosis is terminal.  Ollie seeks financial relief by reaching out to his estranged father who while lending his son the money, is not told about the grave situation at hand.  Just prior to her passing, from her hospital bed Jenny tells Ollie to not blame himself and to please hold her tight before she passes away.  When Ollie's father discovers that Jenny is extremely ill, he travels to New York City but by the time he reaches the hospital, Jenny has passed.  Ollie's father apologizes to his son.  Ollie replies with something Jenny taught him: "Love means never having to say you're sorry..." and then breaks down in his father's arms (noting that he had never cried in front of his father until that very moment).

This romance novel, despite receiving rather scathing if not harsh reviews, was an immediate commercial success.  Moreover, despite critics saying Love Story did not qualify as literature, found to their surprise that the book actually helped fuel increased interest in reading, especially with young people from 8th grade on up!  The book became such a wildfire commercial success and pop-culture phenomena that it was made into a full length motion picture and released on December 16, 1970  -- just ten months after it was published! 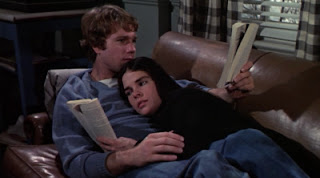 The theme song ("Where Do I Begin?") for the film version of Love Story was a huge success, especially the vocal rendition by Andy Williams.  Erich Segal, the author of Love Story, helped contribute to the film's success by recommending Ryan O'Neal for the role of Ollie.  Segal had worked with O'Neal in the 1968 film "The Games" which profiled various Olympic marathon runners in a fictionalized account of the 1964 Tokyo Olympics.  Interestingly enough, Segal himself was an accomplished competitive runner!

My favorite memory of Love Story has nothing to do with either reading the book myself or watching the film in person.  While I enjoyed both the book and the film, my favorite moment occurred in my 8th grade English class where a female classmate was doing an oral book report before the entire class.  She concluded her report with a deeply moving, poignant reading of the closing pages in which Jenny passes away in Ollie's arms, which then follows with Ollie's reconciliation with his father.  Even now, nearly 50 years later, I get misty eyed when I recall what I believe was one of the very best readings I have ever witnessed.  Her heartfelt reading inspired me to read the book and then see the movie.  The theme song from the film later became my mother's favorite!

Love Story is not merely a pop-culture relic from the late 1960s / early 1970s, but a stirring reminder on why we celebrate Valentine's Day and how love transcends all generations.  As the song title says ... "Love Makes the World Go 'Round."

Please join us in celebrating Valentine's Day on February 14th, along with the 50th anniversary Love Story by sharing memories of the book or movie by posting to the Galaxy Facebook page (and be sure to "Like" us when doing so), or via e-mail to the GNN web site.  Likewise, I am always receptive to hearing from our wonderful Galaxy audience and/or connecting via LinkedIn.
View my LinkedIn profile at: https://www.linkedin.com/in/rev-protodn-george-haloulakos-cfa-bab6b43
Posted by Galaxy Moonbeam Night Site at 7:04 PM