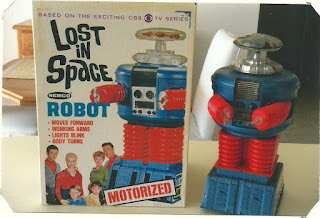 We welcome George Haloulakos, who along with his father, Vassilios E. Haloulakos have authored a fascinating thesis titled "The Science of Space Flight in Classic Sci-Fi Cinema". George relates the technology of space flight that is portrayed in two classic productions: the 1964 unaired pilot episode of "Lost in Space" titled "No Place to Hide", and the 1968 motion picture "Planet of the Apes". How realistic were the space craft and technologies that were shown? Find out by listening in. In addition, we remember that era of the 1960s when the goal to land a man on the moon was at its peak. It was a positive, productive era when the nation joined in the hope that this goal would be reached, and that the dream of President John F. Kennedy would be fulfilled before the end of the decade. Photo courtesy of George Haloulakos, from his personal collection. Please go to our Facebook page to see additional items from George's collection in the "Man, Moon, Media, and Myth" photo album.

Posted by Galaxy Moonbeam Night Site at 2:31 AM