"WAR AND REMEMBRANCE" - World War I and Christmas on the Battlefield

Last month's GNN Blog about the "Peanuts" comic strip (written and illustrated by Charles M. Schulz) prompted a number of reminiscences about Charlie Brown's pet dog, Snoopy.  As we are in the midst of the Holiday Season, this appropriately included vivid recollections about "Snoopy's Christmas," a hit song from 1967 by The Royal Guardsmen that is repeatedly played on radio airwaves along with time honored Holiday themed songs throughout the month of December.  In this classic Christmas novelty song Snoopy is on the losing end of a dogfight with the Red Baron.  But just as it seems like it is all over for our hero, the Red Baron breaks out a bottle of Champagne and the two rivals celebrate Christmas with a holiday toast!  The two World War I rival pilots part ways knowing they will resume combat on another day, but NOT on Christmas!

What is generally not known is that this novelty song is based on the historic event of the first Christmas Eve during World War I, often referred to as the Christmas Truce.  It was during this time that German and British infantry men emerged from their trenches in which they bartered cigarettes, played soccer, sang Christmas songs, exchanged prisoners along with exchanging Holiday Greetings and holding joint burial services!  With the truce running for several days there was extensive fraternization between enemy forces in open daylight that involved well over 100,000 soldiers! This amazing event for humanity (that also extended to French and Belgian forces) occurred despite the orders of high command.  Candles were lit and placed upon both trenches and Christmas trees, thereby reminding everyone that Light Eternal from this Holy Season would shine forth, even on the battlefield. 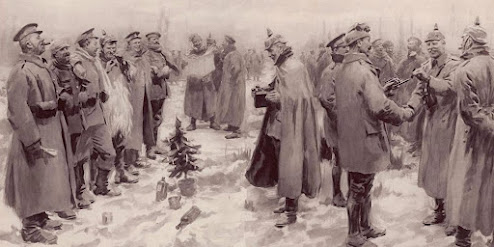 The National WWI Museum and Memorial has an online collection of personal accounts from this unique historic event and we would encourage our GNN audience to learn more by checking this out.  In the meantime, we would like for any of you that have served in the military (including your loved ones) to please share special Christmas memories connected with your military service -- especially during wartime -- by posting to the Galaxy FACEBOOK page (and please remember to "like" us when doing so) or via e-mail to the GNN web site.