Springtime marks the beginning of baseball season and this year's new season brings forth a very special celebration: the 40th anniversary of Terry Cashman's song "Talkin' Baseball."  Mr Cashman wrote and performed this song in 1981 in which he describes the history of Major League Baseball (MLB) from the 1950s to the very early 1980s.  Released in the midst of a nearly 2-month MLB strike, the song provided a wistful remembrance of the summer game as fans eagerly awaited the return of their heroes on the diamond.  Inspired by the memory of when New York ruled the baseball world from the late 1940s through the late 1950s -- [from 1947-1956 either the Yankees, Giants and Dodgers were in the World Series] -- with each of the teams having a star center fielder [Willie Mays with the Giants, Mickey Mantle for the Yankees and Duke Snider of the Brooklyn Dodgers], it was the perfect blend of nostalgia and celebrating excellence. 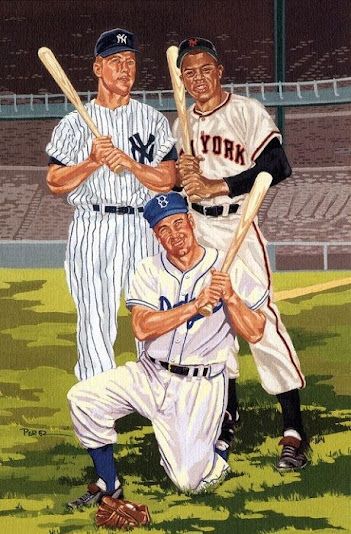 Roger Kahn, a famed newspaper columnist and best selling author who was a native New Yorker, wrote a wonderful book on the subject in which fans debated which of these eventual Hall of Fame center fielders was truly the best at their craft.All three of these wonderful players (appropriately known just by their first names) were enormously gifted athletes, personally popular and accessible to fans everywhere, but especially in New York, where they lived and played.  Mr Cashman's song begins with the first ten notes (in a synthesizer version) of the song "Take Me Out to the Ballgame" before he begins singing.

What makes "Talkin' Baseball" so compelling is the many players and managers referenced throughout the song, some by their full name while others it is either a partial name or nickname -- all them instantly recognizable, even to the most casual baseball fan.

In short order, one is treated to over three decades of baseball history through the prism of the many wonderful, iconic players from that era.  Here is a very small sampling:

- "One Robbie Going Out" (Jackie Robinson)

- "One Robbie Coming In" (Frank Robinson)

Mr. Cashman also manages to pay tribute to his childhood friends in the song by referring to them as "The Bachelor" (Mike Green) and "Cookie" (Bobby Cook).  Iconic teams (the "Whiz Kids" - a nickname for the Philadelphia Phillies 1950 National League Champions), great moments ("Bobby Thomson had done it" - the Giants winning the pennant in the final inning of their 1951 final playoff game versus the Dodgers) and great managers ("Well Casey was winning" - referring to Casey Stengal piloting the Yankees to 7 World Series Championships and 10 American League pennants in 12 years) are all mentioned in this song, along with much more.

The much more includes a couple of US Presidents:  "And Ike was the only one winning down in Washington '' (Dwight Eisenhower - POTUS - 1953-61 -- while the Washington Senators were a perennial loser in the same period).  "And the great Alexander is pitchin' again in Washington" is a double reference to Ronald Reagan (POTUS - 1981-89) who was inaugurated shortly before the release of Cashman's song and who in his former career as an actor portrayed Alexander in the 1952 motion picture "The Winning Team."

In the years since its release, "Talkin' Baseball" gained such great popularity that not only was Cashman honored by the Baseball Hall of Fame in 2011 but the original sheet music is a part of the Baseball Hall of Fame Collection in Cooperstown, New York.  In addition, Mr Cashman has written many alternate versions that are team-specific while being periodically updated and rewritten to reflect lineup changes or major events.  No matter the version, the song brings a smile to the listener's face as baseball marks the return of yet another spring season, that is immediately followed by summer and autumn!

Are any of your favorite players mentioned in the original version?  If so, who are they?  Is there a particular memory of one of those players that stands out above all others?  Who do you think is the best among the Hall of Fame New York center fielder trio that make up the subtitle of this song: Willie Mays, Mickey Mantle or Duke Snider?

Please share your thoughts and memories via posting on to the Galaxy FACEBOOK page (and be sure to "like" us when doing so) or via e-mail to the GNN web site.  Likewise, I am always receptive to hearing from our wonderful Galaxy audience and/or connecting via LinkedIn.

Posted by Galaxy Moonbeam Night Site at 10:24 AM