OCTOBER 2020
LON CHANEY - Universal's Best Classic Monster Star
October is the month we celebrate Halloween and so therefore it is appropriate to pay tribute to the best monster star in Universal Studios Classic Monster roster:  Lon Chaney.
If we were to play "Jeopardy" we would begin with the following answer: He is the only actor to have portrayed all four of Universal's monsters (horror characters): The Wolf Man, Count Dracula, Frankenstein's Monster and The Mummy.  And the question would be: Who was Lon Chaney?
To be more accurate, it was Lon Chaney, Jr - the son of the famed silent film star who was known as the Man of a Thousand Faces.  Originally named Creighton, he later changed his name to Lon Jr in honor of his father who had passed away in 1930, and by 1942 at the behest of Universal Studios, he was simply billed as Lon Chaney.  The "Jr" was only used when published articles needed to distinguish between the two as both father and son were renowned for their portrayal of horror characters.  Unlike fellow Universal stars Bela Lugosi (Count Dracula) and Boris Karloff (Frankenstein's Monster and The Mummy), Lon Chaney was the more diverse and versatile of the trio.  Biographer Don G Smith, author of Lon Chaney Jr - Horror Film Star (1906-1973), noted that Chaney's best work was in such classic films as "Of Mice and Men," "High Noon" and "The Defiant Ones."  Smith affirmed that Chaney was not only more versatile than his fellow monster actors but the best of the Lugosi-Karloff-Chaney trio that enabled Universal to carve out its niche in the horror film genre.  Chaney provided a bigger-than-life onscreen presence that included inner turmoil within the characters he portrayed in film and television.  His ability to engender empathy from the film audience, even while portraying tortured characters, may have resulted from what Chaney himself described as a very difficult early life: his parents' troubled marriage and separation, being raised by deaf grandparents and his ambivalence on taking on his late father's film career and becoming an actor.  Perhaps Chaney was able to use acting as a means to express his personal travails experienced in his own family life.  Whatever the reasons, nearly half a century since his passing, Chaney's exemplary work remains a standard of excellence for connecting personally with the audience and engendering empathy if not sympathy while portraying horror characters. 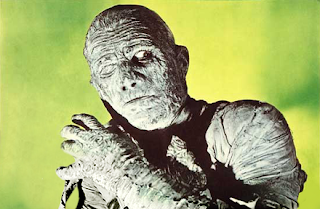 Chaney portrayed The Mummy three times between 1942 and 1944, Frankenstein's Monster in 1942 and Count Dracula in 1943.  But it was as The Wolf Man that Chaney made his signature mark as a horror film star appearing as Larry Talbot, a man bitten by a werewolf who becomes one himself, and then seeks help to cure himself of this condition.  Between 1941 and 1948, Chaney appeared as The Wolf Man five times as the sequel proved to be a most effective film vehicle for bringing back to life the title character even after it appeared he had died!  The fifth film was a crossover that featured Chaney in his signature role along with Lugosi as Dracula in supporting roles as part of an Abbott & Costello comedy vehicle that allowed Universal to showcase its dynamic comedic duo and its Classic Monsters.
My personal favorite of the Lon Chaney Wolf Man franchise was "House of Dracula" (1945) in which Larry Talbot is finally cured of his werewolf syndrome through surgery.  Perhaps in tribute to the empathy that horror film fans had for the Talbot / Wolf Man character, he was able to help vanquish both Dracula and the Frankenstein monster in the film's exciting climax.  Appropriately this marked the last of the "dramatic" Universal movies that featured Frankenstein's monster, werewolves and vampires save for the aforementioned comedic entry "Abbott and Costello Meet Frankenstein" (1945) that featured all three horror figures. 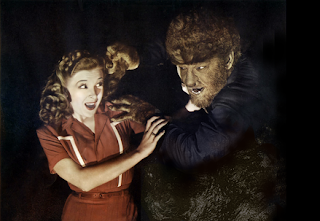 The Wolf Man and Lon Chaney became woven into the popular culture of baby boomers due in large part to Universal Studios releasing its archive of classic horror films to television in 1957 and then the following year (1958) Famous Monsters of Filmland magazine regularly profiled all of the films featuring Universal's Classic Monsters in a monthly publication that could be found on the newsstands of every major grocery store chain throughout the USA.  Baby boomers came to view these classic films that had been originally released decades before as contemporary films, thereby creating generations of new fans, especially as local TV stations in various major markets (Los Angeles, New York, Chicago and Philadelphia) aired these films on weekends with hosts dressed for Halloween.  This tradition continues to this very day: think "Elvira - Mistress of the Dark" and "Svengoolie." 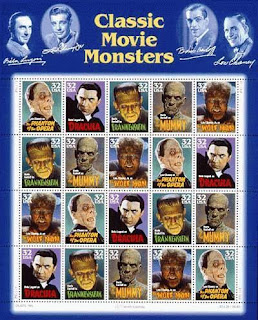 In 1997, the US Post Office paid official tribute to the Universal Classic Monsters with a series that featured Dracula (portrayed by Bela Lugosi), Frankenstein's monster and The Mummy (both with the likeness of Boris Karloff), The Wolf Man (Lon Chaney Jr) PLUS as a bonus -- The Phantom of the Opera (!) portrayed by ..... Lon Chaney -- father of Lon Jr!  Thus, father and son were reunited in the iconic film roles for which they were best known among horror film fans, with Lon Jr representing the "talkies" and Lon Sr representing the "silent film" era.
In closing this remembrance of Lon Chaney and his iconic role as The Wolf Man, here is the closing passage spoken by actress Maria Ouspenskaya (who played Maleva the Gypsy Woman who sought to help Larry Tolbot find a cure for his werewolf syndrome) as Talbot / Wolf Man lay dying at the end of "The Wolf Man" (1941):  "The way you walked was thorny, through no fault of your own, but as the rain enters the soil, the river enters the sea, so tears run to a predestined end. Now you will have peace for eternity."  Given the challenges Chaney had during his own lifetime, this would seem an appropriate epitaph for Universal's Best Classic Monster Star.
Please join us in paying tribute to Lon Chaney and all the Universal Classic Monster Stars by sharing your thoughts via posting on to the Galaxy FACEBOOK page (and be sure to "like" us when doing so) or via e-mail to the GNN web site.  Likewise, I am always receptive to hearing from our wonderful Galaxy audience and/or connecting via LinkedIn.
View my LinkedIn profile at: https://www.linkedin.com/in/rev-protodn-george-haloulakos-cfa-bab6b43
________________
Posted by Galaxy Moonbeam Night Site at 10:15 AM