Golden Anniversary of APOLLO 13 - Heroism For the Ages

For Baby Boomers, the year 1970 featured a remarkable display of heroism that not only defined the Apollo manned space exploration program but continues to inspire anyone who may be faced with grim or dire circumstances in which there is seemingly no hope.  Apollo 13 was designated as a mission focused largely on scientific exploration as the immediate two preceding missions, Apollo 11 and 12, respectively, fulfilled President Kennedy's goal of a manned lunar landing before the end of the 1960s and then affirming the precision spaceflight and landing skills of American astronauts. 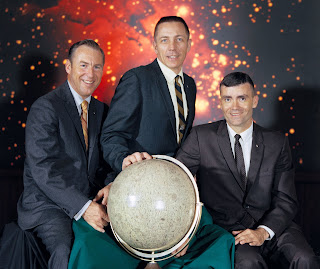 Needless to say, the original Apollo 13 mission was aborted and became a life-or-death situation as an oxygen tank in the service module failed two days into the spaceflight.  The Apollo 13 crew - James Lovell, John Swigert and Fred Haise - displayed superlative courage in the face of enormous odds by improvising critical solutions with the aid of ground control to loop around the moon and safely return to Earth.  The situation was crucial as the crew faced the prospect of running out of oxygen and power in the midst of their spaceflight.  However, the astronauts were able to use the lunar module (call sign "Aquarius") as a lifeboat while shutting down the command module (call sign "Odyssey") so that its resources could be conserved for reentry into Earth's atmosphere.

The "Aquarius" was designed to support two men on the lunar surface two days, but its systems were reconfigured along with transfer of cartridges from "Odyssey" to enable three men to survive for four days.  This was cutting it extremely close, especially noting that the mission launched on April 11 and landed back on Earth April 17 (with the explosion of the oxygen tanks occurring April 13).

The Apollo 13 astronauts exemplified heroism not only for the Space Age but for all ages.  My father, Dr Vassilios Elias Haloulakos, worked with Lovell and Swigert.  Yours truly, courtesy of my father, met Haise in person in 1977.  As such, the Apollo 13 astronauts are considered as extended family members!  These men were heroes before they were astronauts: all were holders of degrees in science & engineering, active duty members of the US armed services and test pilots.  While their original mission was bringing the light of knowledge to all mankind through scientific exploration of another world, the Apollo 13 astronauts ironically ended up exemplifying heroism associated with the Homeric legend that was the command module's call sign! 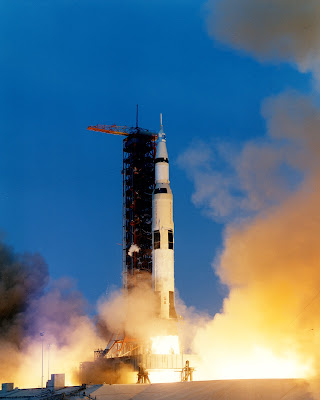 Apollo 13 has been immortalized in pop culture and media, and we would commend our Galaxy audience to peruse the archives of published works as well as various TV documentaries and of course, take time to watch the 1995 motion picture directed by fellow boomer Ron Howard.   As an example of how Apollo 13 still holds the public imagination is that the most popular or widely known expressions inextricably connected with Apollo 13 continue to be a part of our lexicon: "Houston, we have a problem" and "Failure is not an option."

Please join us in celebrating the Golden Anniversary of Apollo 13 by sharing memories of this major historic event by posting to the Galaxy FACEBOOK page (and be sure to "like" us when doing so) or via e-mail to the GNN web site.  Please also include your other memories of this remarkable era when mankind set forth on a journey to the stars.  Likewise, I am always receptive to hearing from our wonderful Galaxy audience and/or connecting via LinkedIn.
View my LinkedIn profile at: https://www.linkedin.com/in/rev-protodn-george-haloulakos-cfa-bab6b43
Posted by Galaxy Moonbeam Night Site at 2:56 PM